The Mangala Vihara Dhamma Fellowship (MVDF) initiated Pindapata Day in 2013 made its debut on August 9th that coincided with the 48th Singapore National Day celebration. Since then it has been an annual event and this celebration on August 9th 2018 was in its sixth conservative year.

The sangha community invited for the pindapata event at Mangala Vihara (Buddhist Temple).

Upholding the tradition of the late founder monk, M.M. Mahaweera Nayaka Thero, a pot luck menu with a potpourri of cooked vegetarian food that included pastries, desserts, soups and fruits brought by devotees, participants and well-wishers were delivered to the kitchen by 9:15 am. The kitchen staff sorted and laid out the sumptuous food on the monks’ table and the general tables of the devotees, participants and well-wishers. As the saying goes: “variety is a spice of life” there was an array of Chinese, Indian, Malay and Myanmar cuisines that filled the tables.

“When they give out of faith with a heart of confidence, food accrues to (the giver) himself both in this world and the next.” (SN 1:43).

An array of sumptuous food set on devotees’ tables …

… and beckoned of food on the monk’s table.

The alms round commenced at 10:15 am with devotees lined in two single rows facing each other along the route that commenced from the Bodhi Tree and ended at the Mangala Hall. The original plan was a single row of devotees lined along the designated route. However, due to the overwhelming numbers of devotees the plan was devised to accommodate all of them two single rows facing each other. Each devotee was given a bowl of plain rice and mindfully scooped a spoonful into the alms bowl of the monk as he passed by. Offering of requisites were received by the accompanying kapiyas. 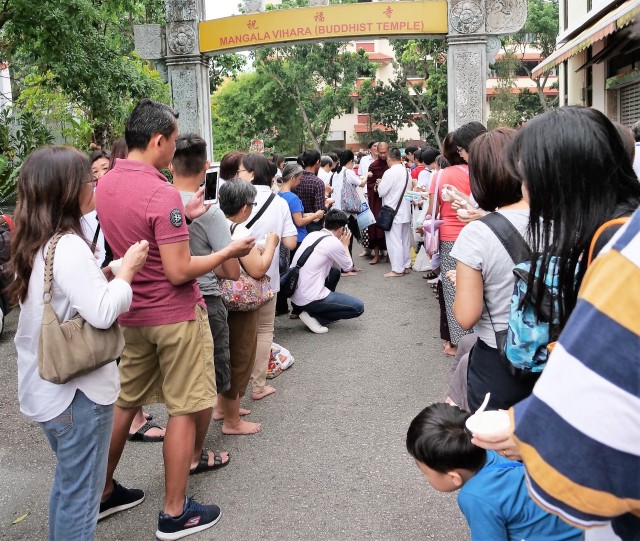 … and mindfully dropped alms food into the monk’s bowl as he walked pass.

The morning puja commenced as usual at 11 am with a full capacity in the Shrine Hall with many faithful devotees spilled to the doorways and corridors. 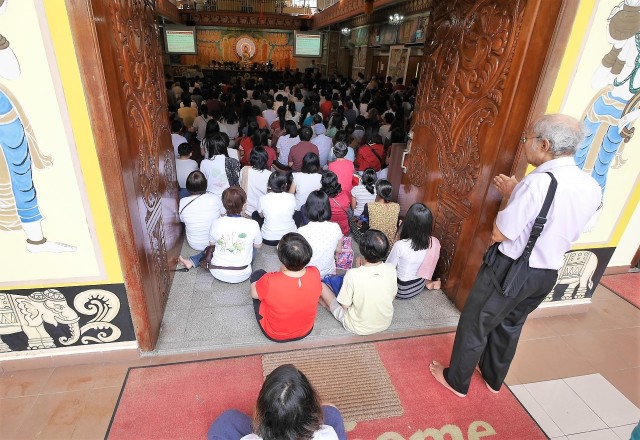 … with many faithful devotees spilled to the doorways and corridors.

Sanghika dana and transferring of merits

To accommodate the 19 monks three tables were set up with several volunteers served food to them in a timely manner before noon as they consumed food at proper time. The devotees then touched the table to receive blessing followed by transference of merits to the departed ones along with the chanting by the monks.

Devotees touched the table to receive blessings followed by …

… followed by transferring of merits to the departed ones by the symbolic pouring of water from a tea pot into a bowl along with the monk’s chanting.

Monks observed strict meal time, do not eat after noon and two meals a day without dinner. This allows them to have time to practice as they “consume food neither for amusement nor for intoxication nor for the sake of physical beauty and attractiveness, but only for the support and maintenance of the body, for avoiding harm, and for assisting the spiritual life.” (AN 4:159). The commentary elaborates: “In this body, which exists in dependence on requisites, I shall, by moderate eating, have health called ‘long endurance’ since there will be no danger severing the life faculty or interrupting the (continuity of the) postures.” Reflecting in this way, he makes use (of alms food) as sufferer from chronic disease does of his medicine.”(Vism.1.94). In order to stay in good health Lord Buddha maintained the stance “I, monks, do not eat a meal at night in the evening and thus I am free from illness and affliction and enjoy health, strength and ease.” (M.l.437).

When the monks started with their meal at 12 noon the devotees proceeded to consume the food with delight. When food is needed to satisfy hunger and sustain the body, “they always take delight in food, both devas and human beings. So what sort of spirit could it be that does not take delight in food?” (SN 1:43).

“They always take delight in food, both devas and human beings. …

It was indeed an exceptional event with many firsts: 19 monks graced the occasion, an unexpected large turn-out of devotees, the event was video recorded* and; last but not least an affable support from MV(BT) Chairman Mervin Phua. (*The editing process will take about 3 weeks. It is not available at time of publishing).

As the principal co-ordinator of the event, Sister Suraity “Sue” Simon was happy with the outcome and sounded her sentiments gleefully: “This year, Pindapata event was amazingly great with great turn-out and equally great co-ordination amongst the core organizing team. It was indeed a well-orchestrated event that went well and smooth throughout, without any hiccup. Every little detail have been considered – providing chairs for the elderly while waiting for the Sangha, food distribution points, queue markings for the devotees, crowd control, kapiyas for the individual monk, leading the procession by the lead kapiya and final gathering at the Shrine Hall. Everyone participated in the sharing of merits. A few members and volunteers helped in serving the Sangha. Lunch was a sumptuous spread brought in by the devotees, and everyone did enjoy every moment of the event. What made it so special this year was the high participation of the Sangha members, 19 of them in total, injecting a spiritual atmosphere, providing an opportunity for the devotees to offer the alms, and to accrue great merits. A general comment from the crowd was “a very good job”, “well done” and “this year great improvement”. These comments were very encouraging, reminding us to work harder and better for the next year event. I must thank all the members, volunteers and devotees to make this occasion a very successful one.”

The resounding success of the event was indeed a great occasion that captivated Chairman Mervin Phua’s observation: “This year’s Pindapata celebration was a huge success with more than 400 members and devotees participating in the event. The celebration would not have been possible without everyone in MVDF making extra efforts in the preparations and early planning by the various sections to make this year a Great Success. It was a memorable occasion well attended by 19 monks from various Temples in Singapore. Congratulations!”

The success of this eventful occasion would serve as an impetus for future events undertaken by MVDF vis-à-vis MV(BT) to scale greater height for the propagation of the Dhamma.

Come 2019, the MVDF will celebrate its 10th anniversary and it is envisaged to hold a maha-sanghika dana, together with other events as the case may be, to commemorate the grand occasion. With the resounding result of this pindapata event we can look forward to another grandiose occasion next year but mindful of annica, the true nature of impermanence when “whatever exists here on earth and in space, comprised by form, included in the world – everything impermanent decays. The saga fare having pierced the truth.” (AN.1,712).

We will take it in good faith as we move along while looking forward to the next gathering.

Contributors: Chin Kee Thou for text, photos and video clips; Ye Kyaw Tun and Irwan Alexander for the video recording.

The Photo Gallery is opened for your viewing leisure. You may download any images for keepsake or personal use but not for commercial or monetary gain.
The contributors take responsibility for an inadvertence, factual or otherwise.

Reading Buddhist scriptures and writing articles for the blog and newsletters.
View all posts by Chin Kee Thou →
This entry was posted in Events. Bookmark the permalink.