From ground breaking to grand opening of Bouddha Dharmapithamu

The date November 19th 2017 marked a historical milestone in the revival and spread of Buddhism in Southern India where a Buddhist Centre, Bouddha Dharmapithamu at Undrajavaram, West Godavari District, Andhra Pradesh was completed after three and the half years of laborious work in its construction.

The construction of the Bouddha Dharmapithamu kick started with the foundation stone-laying ceremony on May 24th 2015 witnessed by many local and foreign monks, nuns, dignitaries and guests on this noble and auspicious event.

In order to maximise optimal usage of the Bouddha Dharmapithamu a soft opening ceremony was held on January 16th 2016 when the building was partially completed with two stories ready for occupancy. Six samanaras were adopted to provide linage to keep Buddhism alive in the Southern India vide this Centre. Today it has a total of thirteen samanaras.

The thirteen samanaras on campaign trail for the opening ceremony of the Centre.

The cumulation of the preceding events climaxed with the grand opening of the Bouddha Dharamapithamu, which incidentally is also the tallest building in the vicinity, serves as a beacon in the propagation of Buddhism in this region of the country.
It also serves as a resource centre for research and academic pursuits for scholars. Ironically, Buddhism originated in India some 2500 years ago had somewhat evaporated for the country of birth but flourished in many nations overseas. It is indeed a noble cause that could not come at a more opportune time for the establishment of the Centre for the revival of Buddhism. 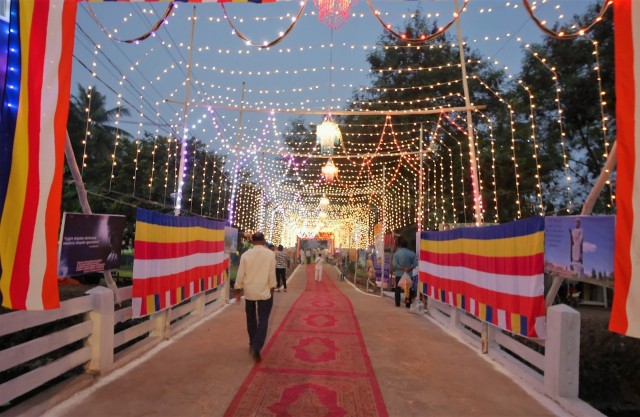 Archway of glistering lights leading to the Boduddha Dharamapithaum for its grand opening ceremony.

The main group from Singapore departed on November 17th 2017 comprised of nineteen personal viz: four sangha members and fifteen devotees and well-wishers graced the occasion. Ajahn Keng, Bhante Cakkapala, Bhante Dhammajothy and Bhikkku Lee were among the entourage by invitation.

The list of the sangha who spells who and who were:

Brothers Raymond Yow, Hing Sing Huat, Goh Swee Pheng and I arrived on November 16th assisted and oversaw the preparation for this grandiose event working in collaboration with the working committee under the charge of Bhante Analayo. Brother Raymond the team leader with a game plan conferred with him on the ritual and ceremonial aspects like sitting position of the sangha on stage for the sanghika dana, procedure for offerings to the Buddha like water, light and fruits by selected lady devotees and selection of monks for delivering of speech. A rehearsal was held to ensure proper and timely execution of the tasks.

Raymond Yow and Hing conferred with Bhante Analayo the game plan with members of the local working committee ….

… and execution of the game plan with the contractor. 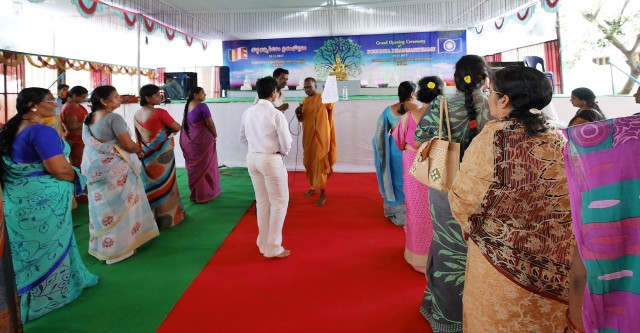 An estimated turnout of about 5000 well-wishers and visitors was envisaged, called for set up of a large tentage and marquee pitched on the vacant land adjacent to the Centre to accommodate the congregation together with a stage for sanghika dana for 47 monks and nuns.

… and a stage for 47 monks and nuns for sanghika dana.

The preceding two days to the grandiose event were campaign trails by monks, nuns and samanaras, led by a bajaj (Indian three wheel tricycle) decorated with banner on each side pitched with two loudhailers on its roof, blasted away and broadcasted the event as they meandered through selected route of roads, allays and lanes to the villagers and residents within the vicinity of the Centre which is about five kilometres in radius.

Bajaj decorated with banner on each side led the way in the campaign trails pitched with two loudhailers on its roof blasted away broadcasts.

The processions with flag bearing supporters distributed flyers to passers-by, cyclists, motorcyclists, shopkeepers, stallholders and even delivered to their homes. The campaign trial listed for about three hours per trip on each day. 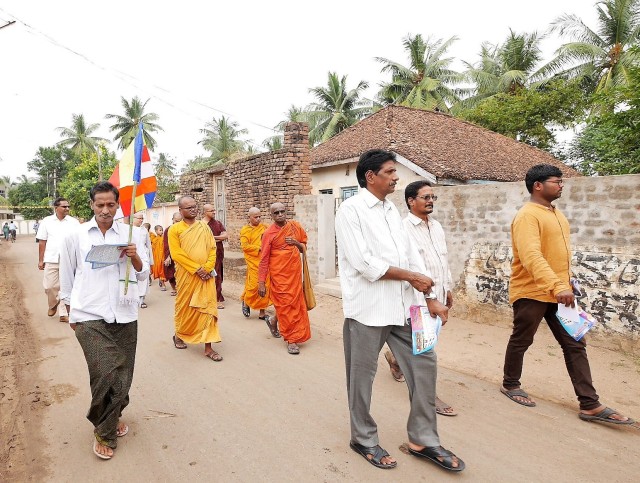 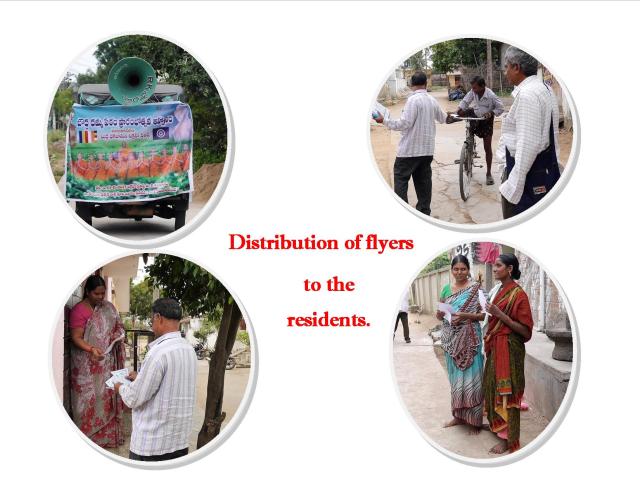 On the eve of the auspicious day the press called upon the host and selected representatives for an interview and the news items were reported in the vernacular press.

… and team leader from the Singapore delegation, Raymond Yow.

The grandiose event started at six o’clock in the morning with a procession of sangha order comprised of monks, nuns and samanaras in a single file formation, led by the most senior monk in term of the number of vasa, went for alms round or pindapata, flanked on both sides by devotees and flag bearers dressed in all white travelled along the rehearsed route.

Sangha order readied for alms round flanked on both sides by devotees in all-white attire awaited for the signal to proceed.

There were two setup distribution points where devotees and well-wishers offered alms or dana to the sangha as they passed by, mindfully dropped them in the alms bowl of each sangha member and samanara. “In giving food, one gives five things. What five? One gives life, beauty, happiness, strength and intelligence. And in giving these things, one partakes in the qualities of life, beauty, happiness, strength intelligence, both here and hereafter.” (A.III,42). 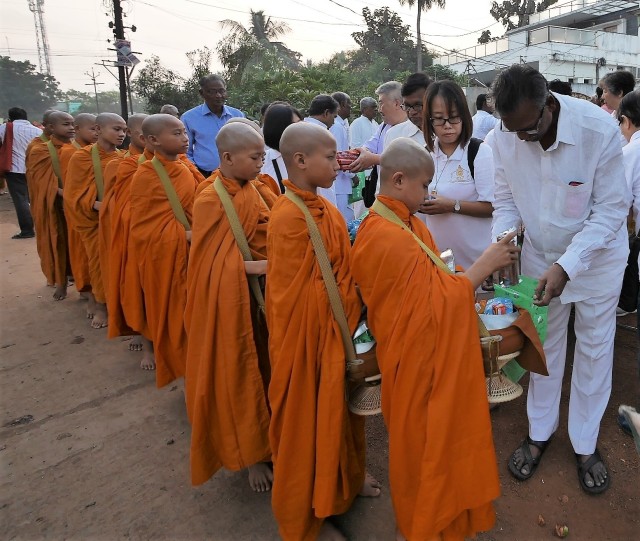 The alms-gathers on their way back were welcome by devotees and well-wishers who lined the walkway of the Centre and sprinkled corollas at the feet as they walked pass and then headed to the washing point had their feet washed and dried before headed for the stage set up for the sanghika dana. 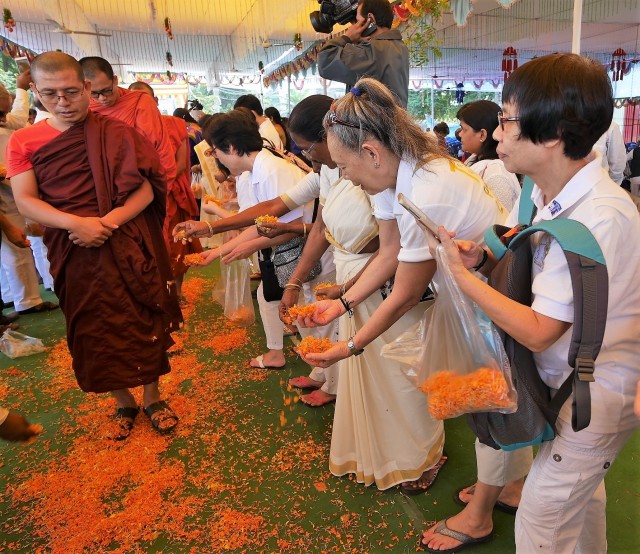 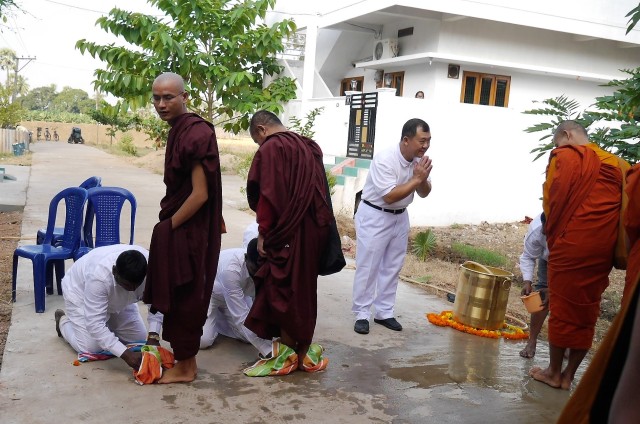 : … had their feet washed and dried before going up the stage for sanghika dana.

The opening ceremony was initiated by Madam Chitturi Usha Rani of the Hotel Chitturi Heritage symbolically cut the blue ribbon attached across the main gate and declared open the Centre while the crowd watched enthusiastically. 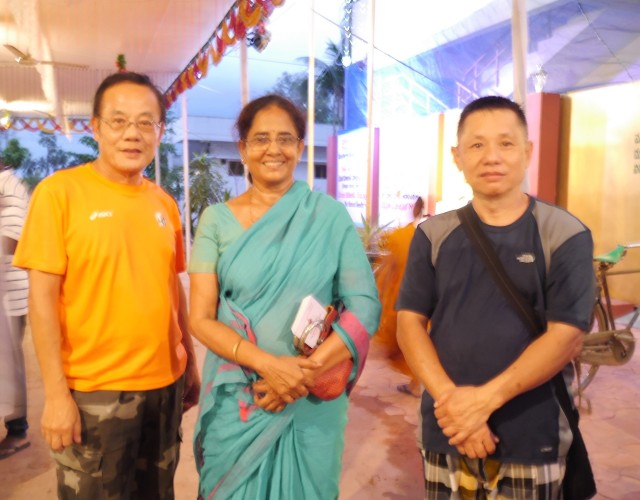 VIP Madam Chitturi Usha Rani of the Hotel Chitturi Heritage flanked by Raymond (left) and Hing (right) who would officiate the opening of the Centre.

Simultaneously on the fourth-storey the Dhamma Hall with the newly installed five-foot marble image of the Buddha from Mandalay was consecrated by the lighting the oil lamp performed by Ajahn Keng, Bhante Dhammajoti, Bhante Khemacaea and Bhante Rathanajoti. 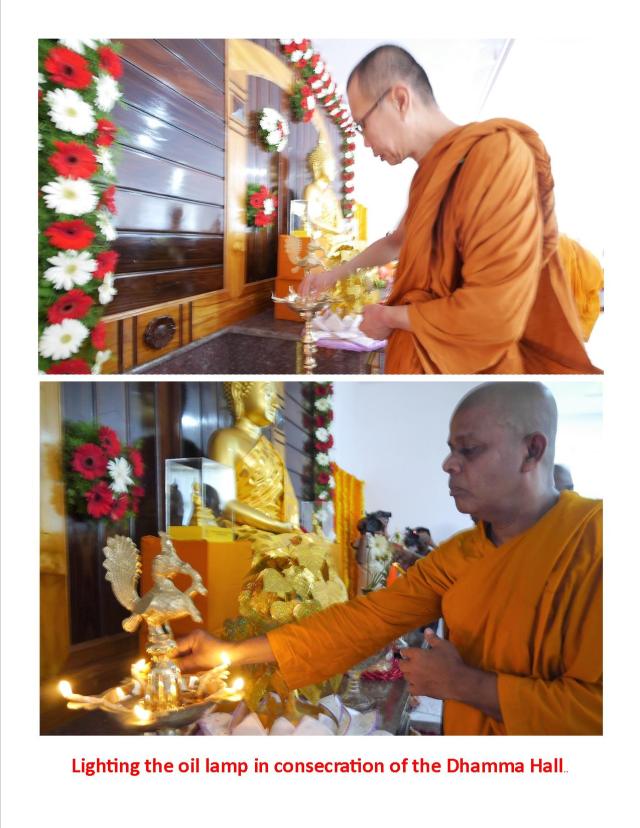 The consecration of the Dhamma Hall attended by selected local congregators. The entourage from Singapore in full attendance was among them to witness the occasion.

Full entourage from Singapore among the congregators witnessed the event … 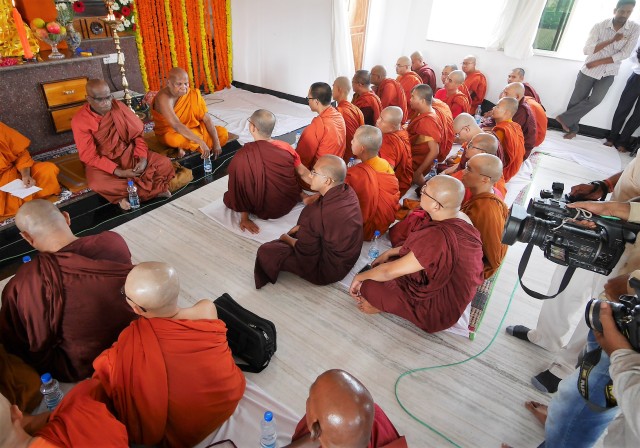 … with live telecast of the event to the viewers in the tentage in progress.

Commendable speeches were eloquently delivered by the monks in commemoration of the event which was telecasted live on a gigantic led screen to the congregators under the tentage. 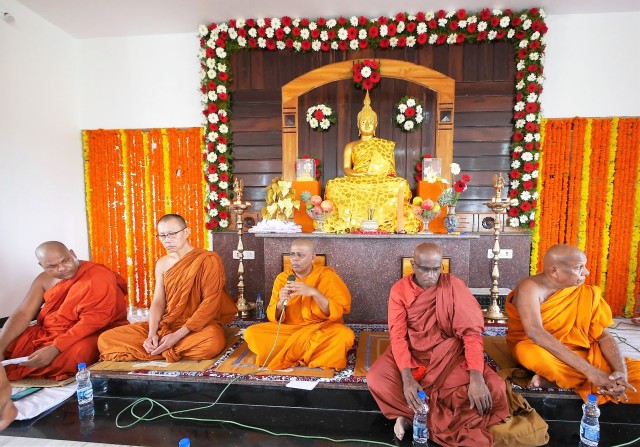 Monks delivered commendable speeches in commemoration of the event.

Conducted tour of the Centre

The newly completed Bouddha Dharmapithamu serves as a beacon in the propagation of Buddhism and a resource centre for research and academic pursuit.

On the third storey are the guest rooms and dormitory for the samanaras, is a restricted area with a gate which is out of bounds to visitors

What a splendid gift!

The funds for the Centre were contributed by donors from Hong Kong, Indonesia, Malaysia; and Singapore – the main benefactor. It is indeed a noble deed of the incumbents to emulate the great deed of Anăthapindika who purchased Jetavana Grove from Prince Jeta with a handsome price of the number of gold coins that covered the park. A monastery was built upon the land as a gift to Lord Buddha who spent twenty four raining seasons at the Jetavana Monastery. Although the benefactors’ infinitesimal deed paled in comparison to the gift of Anăthapindika, it is still a meritorious deed and even more magnanimous vis-a-vis in wealth.

Contributor: Chin Kee Thou
Date: December 4th 2017
Readers are cordially invited to visit The Gallery to view more photos. You may download any photo you desired for keepsake.
Contents, photos and video clip by contributor who takes responsibility for any advertence, factual or otherwise.

Reading Buddhist scriptures and writing articles for the blog and newsletters.
View all posts by Chin Kee Thou →
This entry was posted in Uncategorized. Bookmark the permalink.