Buddhism in Daily Life is an evening non-examination class in its third year running (“Buddhism in Daily Life” – A New Course – eDhamma.net). Dhamma talks form an integral component of the curriculum with guest speakers to give lectures on various topics relating to Buddhist practice.

The past speakers over the years included Bhante Cittara, our Chief Resident Monk on “LGBT” and Bhante Andhra Analayo, a venerable from India on “The right way of doing dāna according to Buddhism in a Nutshell”. Dhamma Talk by Venerable Analayo | Buddhism and Daily Living.

We were fortunate to have Venerable Dr.Sumanasiri who delivered a lecture on “War and Buddhism” on March 30th, as a first guest speaker for the year 2015.

The Father of Singapore

Preceding the commencement of the Dhamma talk in remembrance of the late Mr. Lee Kuan Yew, it was only befitting for MVDF Chairman Raymond Yow who delivered a eulogy in honour of the elderly statesman. 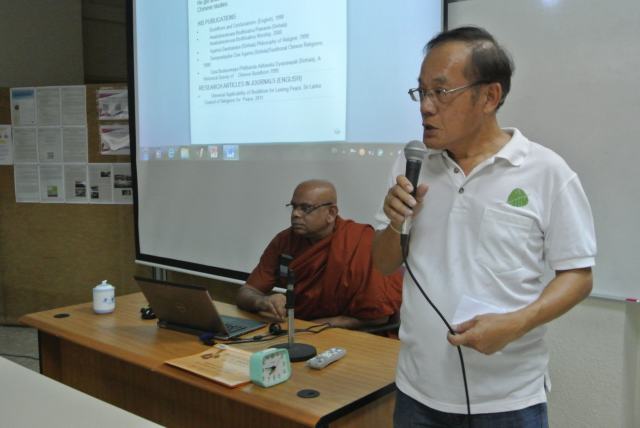 A minute of silent was observed in respect of the late Mr. Lee Kuan Kew, the founder of Singapore.

Observing a minute of silent for the late Mr. Lee Kuan Yew

“War and Buddhism” Lecture and Q&A

As the series of Dhamma Talk proved to be popular, give encouragement to organize more of such events for the benefits of students, devotees and well-wishers in the propagation of the Dhamma to enhance their practice.

Bhante Andhra Analayo who will be making a stop-over at Singapore following an invitation to visit Ho Chi Minh has graciously accepted an invitation to deliver a talk on May 25th 2015, his second lecture. The topic has yet to be determined. Readers may submit your preferred topic, if any, to chintouch@singnet.com.sg . All submissions will be given favourable consideration however acceptance is not assured.

Also in the pipeline is Venerable Dr. R. Gnanaseeha Maha Thero, Chief Resident Monk of Samadhi Buddhist Society has graciously consented to deliver his lecture on June 29th 2015. He will talk on the ever popular and demanding topic “Essence of Buddhism” which he delivered in a seminar on March 14th 2015. Seminar on Essence of Buddhism | Buddhism and Daily Living .

A chart “Essence of Buddhism” basically on dependent origination will be referred to during his lecture. Incidentally, this chart was reviewed and vetted by an eminent Buddhist Scholar monk, Bhikkhu Bodhi residing in New York. All attendees will receive a copy either the English or Chinese edition.

So do keep a date with us on May 25th and June 29th to listen to the talks from great speakers.